This post will contain spoilers, so read on at your own discretion!

END_OF_DOCUMENT_TOKEN_TO_BE_REPLACED

Throughout the years, it seems that the WWE isn’t always aware of what they have with their rosters, with so many superstars signed at once, it makes sense some would get lost in the fray, or they choose to push others over them for whatever reason, but I digress.

Some of these superstars have had a main event push, some haven’t. Some might be active, others might not be. To stop this list ending up with me, mainly complaining about the era of the divas, I asked a friend for his input.

This is an opinion post, so take what is said with a pinch of salt!

END_OF_DOCUMENT_TOKEN_TO_BE_REPLACED 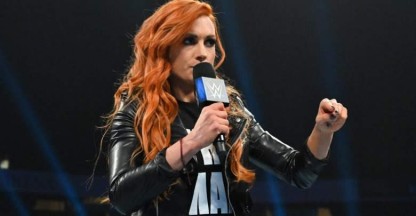 In the modern era of WWE, it feels rare to me that characters like the previous eras are all that prevalent. Gone are the days of the diamond cutting promos of The Rock, the likes of the original DX and the likes of Mick Foley who would practically kill himself for the sake of an entertaining match.
The company’s demographic has changed towards younger children and their families. Which in itself, is excellent. Bigger market, more sponsorships and a chance to make a difference in the lives of children.

Now that the characters/wrestlers of the days of old are either retiring or already retired, the company are looking for talent to hand the torch to lead the company into its future.
It is not always welcomed fondly by the WWE Universe, then we tend to have breakout stars we choose such as the likes of Daniel Bryan and the “Yes Movement” and more recently, in Becky Lynch and Kofi Kingston.
This post is written about the former, though.

After becoming the inaugural Smackdown Live Women’s Champion and ultimately losing it to Alexa Bliss, her momentum just died.
She was always in the shadow of other female talents, namely Charlotte Flair.
Don’t get me wrong, Charlotte is incredibly talented, she carries her father’s name very, very well, but fans wanted Becky.
Charlotte was getting chance after chance, even when she didn’t really earn them in regards to storylines, she’d succeed, yet people wanted Becky on top of the mantle.

After losing the Summer Slam match that she had earned in a storyline that Charlotte was just placed into, we saw the apparent “heel turn” and the rise of what is arguably the talk of the business in general and one of the best characters to grace the WWE since the days of Stone Cold and The Rock.
Much like Stone Cold, the lines of face and heel were blurred, he didn’t care for authority,  he took no prisoners, anybody in his way would be removed by force, not typical “face” behaviour but adored by the crowd.
There haven’t been many pops that compare to the Stone Cold pop. 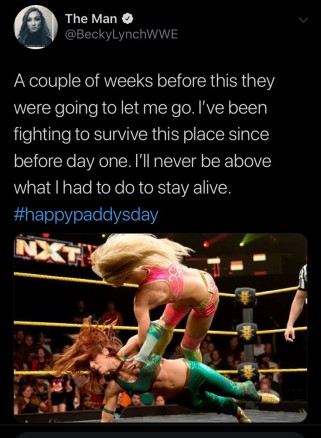 Becky is the underdog, the company didn’t want her front and centre, she was consistently overlooked in favour of Charlotte.
She deserved better, she knew it and decided to take on anybody who stood against her.
As shown in the screenshots from her own Twitter directly above and below this paragraph, she is acutely aware of the fact. 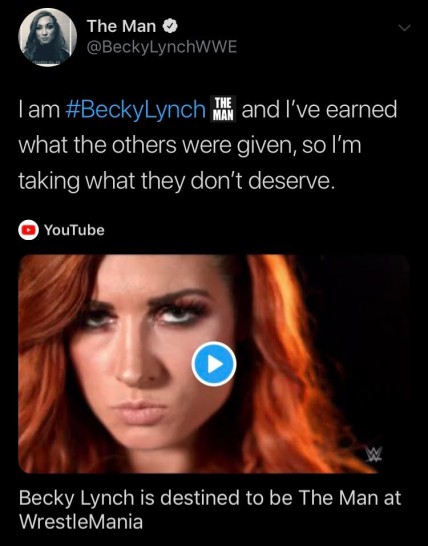 I use this comparison loosely, merely because it doesn’t feel right comparing the two down to the letter, both are outstanding icons of their respective eras, Becky in ways is the female Stone Cold.
Everyone else stood back and waited for their chance.
Becky took her chance. Becky challenged the status quo, Becky fought authority. They tried to keep her down, but that’s not what she wanted to do.
Like Stone Cold, she has been escorted out of arenas, she came back fighting, the photo set below draws that parallel with the Texas Rattlesnake himself. 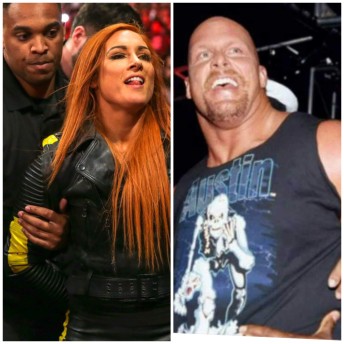 Becky is the man, who we need to carry the women’s revolution, evolution, whatever they use, forward.
The division needs more women who aren’t afraid to go for what they want by any means necessary.
She’s making history by being in the first all-female Wrestlemania Main Event if WWE knows what they are doing overall, putting both titles on Becky Lynch and having her win the first female main event will be best for business.
She epitomises the phrase “every dog has its day”.

We need more breakout stars like this within the WWE!