What I talk about in this post are just theories, I have no means of proving or denying them.
It’s all in the name of fun!

This is the final post on the subject, for now.

Was the moon landing staged?

There are a lot of people who believe that America’s first foray onto the moon didn’t actually happen in the way they presented it. There are different theories floating about, pun intended, but my favourite has to be that Stanley Kubrik was the one who staged it, and even filmed it!

This theory came about because Stanley Kubrik was filming the movie “2001: A Space Odyssey” around the tie that NASA were preparing to launch, then NASA approached Kubrik to film the moon landing. Just to add to this already odd tale, The Shining was full of clues pointing to his involvement!

Tensions during the space race during the Cold War were already high, Russia had sent a dog into space by this stage, so why wouldn’t the American government want to one up their competition? 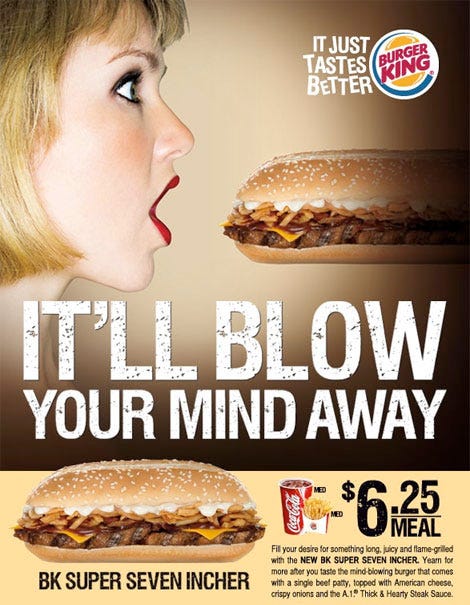 I am way too immature to not use this photo as an example, the image is from a Buisness Insider article. CampaignLive.co.uk describes subliminal advertising as: “The use by advertisers of images and sounds to influence consumers’ responses without their being consciously aware of it.”

The image I used above shows something very, suggestive, doesn’t it? There are other examples of suggested images used in food/drink advertisements, they are used to catch your attention, this sure caught mine. They say sex sells, after all!

A shorter entry today, a lot of the theories I found tend to be an alternate version of ones I wrote about, so I just chose the two that entertained me the most, this is the last piece on this subject, for now!
I’ll be working on urban legends I found fascinating within the next two weeks. I’ve got a 2 post series on how I manage my blog posts, what I use to help manage my feeds and all that good stuff.

Thank you for your time, I appreciate you being here!
Follow my blogs Twitter and Instagram feeds.
I also have a Ko-Fi page, any donations are appreciated, but never expected.

One thought on “Interesting Conspiracy Theories #3”