This post was inspired by a tweet I saw on my timeline yesterday morning, you should check out their podcast, I know I will be!

What is your favorite #SonicTheHedgehog game on the #SegaGenesis? Was the first the best, or did the series get better with age?

Our Sonic episode is coming in Feb! #retrogaming #Sega pic.twitter.com/zu96aeh7p2

The Sonic the Hedgehog series is probably my favourite game series overall. While the titles Sega have released have been hit or miss, usually miss in some cases, my love for the blue blur has not dwindled since the days I had my first experience with the franchise.

I first experienced Sonic the Hedgehog on the Sega Megadrive, it wasn’t my first gaming system, that was the SNES, I remember my dad bringing it home with a bunch of games. The first two Sonic games being included in that batch.

The first thing I noticed when I played the first entry for the first time was how fast and zippy the levels in the game were compared to what I was used to with the platformers I was playing on the SNES were. You can pick up speed so quickly in Green Hill Zone.
From what I’ve seen of the advertising of this game, even those put such emphasis on Sonic going fast.

I did enjoy this game, but some of its zones were memorable to me, but for the wrong reasons. Marble Zone following Green Hill Zone felt as if I had hit a brick wall. Design wise, it’s great, it was a very sudden change of pace from what Green Hill Zone was. The stage has grown on me as I’ve grown older, though. I still find Labyrinth Zone and its acts to be a monotonous slog to this day. Starlight Zone and Springyard Zone have always stood out to me, for their fun designs and catchy music.

The game also introduced the chaos emeralds, although there were only 6 in the game, collecting them all gives you the “good” ending, but Super Sonic wasn’t introduced until the sequel. They are simple enough, you just guide a falling Sonic to the chaos emerald without hitting the “goal” blocks that end stage.

The stage also has blocks that change the direction the stage is moving in. I quite liked these stages, they were fun and didn’t take all too long. You can memorise their layout and that takes the challenge away from them.

Overall, the first entry in the series is worth playing, but the sequels improved on the concept and implementation.

As a sequel, Sonic the Hedgehog 2 is a much improved title. The music sounds so much better, it is much more colourful. This was also the title that introduced Sonic’s companion, Tails. Who also happens to be my favourite character within the Sonic franchise, alongside Bunny Rabbot from the comic series. The zones cater to Sonic’s speed in this entry since Sega removed the speed cap in the game. It is possible to complete zones in under a minute if you know the layout perfectly.
YouTube user mike89mkscelite uploaded this video completing Chemical Plant Zones second act in 39 seconds.

This game also introduced the 7th chaos emerald and Super Sonic into the game. Attempting these bonus stages with Tails can make them more difficult than they need to be, he is prone to hitting hazards on the stage.
Visually, I preferred the designs of the previous title, there just doesn’t seem to be all that much going on in these, I just don’t like the design in general.

Sonic the Hedgehog 2 is my favourite of the original 2D Sonic games for me, it has always stuck with me and is the one I go back to the most, although it wasn’t perfect. There were a fair few things that needed improvement, Tails would be shown flying back to Sonic, but if you played Tails alone, he was unable to do so. Super Sonic would also activate automatically once you collected 50 rings and jumped, which I wasn’t a fan of, personally. Tails is also able to collect the emeralds, but lacked a super form.

The good ending was also achieved in this entry by collecting all the emeralds. 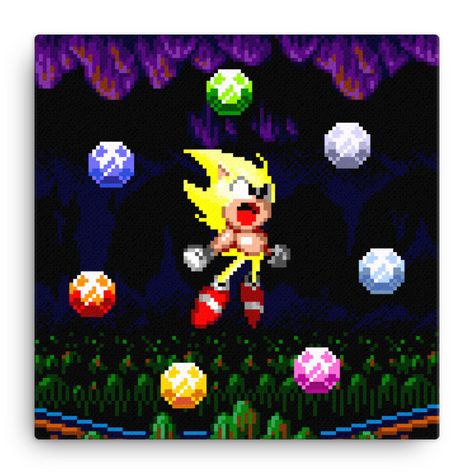 This game was also home to the infamous pit in Mystic Cave Zone! The video below uploaded by YouTube user Espyo.

For the last stretch of this post, I will be talking about Sonic 3 & Knuckles as a complete game, as Sega intended it to be, although both can be played individually.

Sonic 3 & Knuckles was a vast improvement over the previous 2 entries. It added so much. It added Knuckles the Echidna, who was the secondary protagonist for a time in the game, as well as adding him as a playable character with his own unique path ways in the stages.

You collect the 7 chaos emeralds and the newly added super emeralds. The latter added a hyper form for Sonic and Knuckles, as well as a super form for Tails!

This entry added my favourite means to collect emeralds, the blue sphere stages, they were simple and fun to try and perfect. You collect blue spheres, avoid the red spheres and collect rings to get a perfect score, the latter of which being optional. Once you had collected the blue spheres, you got an emerald.

The way you travelled between zones was also improved, instead of just appeaing in a space, transitions were added, I really enjoyed this because it was interesting to see how the characters traversed from zone to zone.

To newer players, I recommend playing 3 & Knuckles. It is the superior entry in the early entries and has more stages, better backgrounds and music overall. The earlier titles are not bad games by any means, this title just improved on them overall. Not quite perfect, but the quintessential 2D Sonic title from that era. It is almost the best 2D Sonic title in my opinion, but Sonic Mania improved on this title.

Thank you for your time, I post gaming content every Friday!
You can find me on my socials:

If you want to donate to my blog, I have a Ko-Fi page that can be found here. Of course, just by being here you are supporting my dream of being a writer!