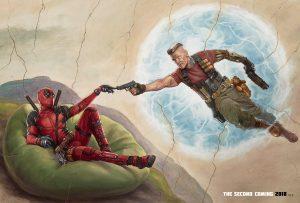 I watched Deadpool 2 last night, what a movie it was! When the official live-action Deadpool movies were announced I was quite sceptical. Given how Deadpool is as a character, I was afraid that the concept wouldn’t translate all too well over to the big screen. Plus, that version of the character that was shown in X-Men Origins: Wolverine was a lacklustre version of the character.

I am more than happy to be proven wrong, the live action Deadpool movies have been amazing! Ryan Reynolds is such a perfect fit. I cannot picture anyone else, other than Nolan North’s voice acting,  portraying the character. The delivery of his lines is always amazing and hilarious.

Deadpool 2 was incredibly funny, the soundtrack was amazing and the different genres summed up the differing natures of Deadpool’s moods and fitted the atmosphere to the letter.
Overall, this was a far superior movie to the original and was a fun time.

I know this is short, I don’t really know how to pen a review confidently yet. You have to start somewhere!